This weekend, Baby M took advantage of a busy afternoon in the most possible way. I was busy in the kitchen and left her with the toys. After few minutes, I felt a little-unusual silence for a long time and the mother instinct hit me. I rushed outside the kitchen and saw our little girl making her first abstract art on the wall of living room. I called her name spontaneously to stop her but the damage had already been done. Being a very obedient child, she instantly offers me the crayon she used for her prototype design. 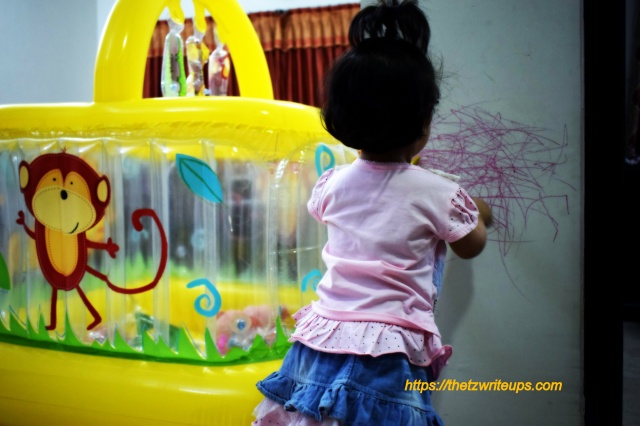 Surprisingly, instead of getting furious, I felt a smile at the corner of my lips and called The-Baba to witness the first ever masterpiece of his “ladli betu”. We exchanged happy looks to congratulate each other for another achievement of our little girl.

This exchange of looks happens every time she does anything new; be it moving a hand in new style. L-O-L. Yes, we are those weird parents who celebrate our daughters’ milestones like no other child has done it ever before. We become the annoying parents who brag about her every act and learnings in front of our families just to ensure that they are updated about Baby M all the time.

The first times are special to every parent and for the first child, it becomes a little more special. Every other night when Baby M has slept after an hour or two sessions of pre-bedtime-play, we look at her and say “she is growing up so fast”. We never get bored of memorizing her every detail and get emotional every single time. It only seems like yesterday when we got to know about her existence. Sometimes the 9+15 months period of parenthood seems to have passed really fast, but upon recalling the path, it feels a journey of exceptional growth.

The first time she tasted food in June 2017 was so exciting for us. She liked mango and didn’t turn away her face. The stupid Mama assumed that she won’t be a problem with food at least. Now, she sees me bringing her bowl of Happ (food) and starts saying no-no-no. The first time we actually wean her off to baby cereal was at the end of July 2017. I remember how The-Baba warned me to wait for him before giving baby cereal for the first time, so he could also witness the big change in his baby’s life.

On 23rd June, she learned to sit with a little support for the first time. Now she just doesn’t want to sit peacefully anytime, anywhere.

On August 5th, we were at The-Dada place when Baby M moved forward on her tummy for the first time. She crawled on her tummy on bed excitedly and came to both grandparents to collect their appreciation. The scenario is little changed now but her attention seeking behavior with grandparents is still there.

The first tooth popped out in November 2017. That night she was crying in a very painful tone and we had no clue what the reason was. Next day, I noticed a tiny shiny white tooth peeking from the lower gums. Now, she has six teeth which she uses very smartly when needed.

By the end of November, she started to walk with support and that was one big day of achieving another milestone. We kept waiting for three months for her to start walking and tried every “suggested” idea by beloved relatives.

Finally, she took her first few independent steps in March 2018 when we were visiting The-Dada’s place to celebrate Baby M’s Appa (cousin sister) birthday. And by the time I came back from Karachi last month, our little duckling was waddling around the house.

These are the major milestones I had in my mind roughly. Some are minor memories like calling Baba for the first time and saying it repeatedly till Mama became jealous. I literally used to ask her all day to say, Mama. The first time and every time she recognizes pictures and answer us correctly give a shiver of realization that she is getting smarter. The times when she scares us from the “Hot No-No” points. She has become the melodious parrot of our lives who is repeating everything in her alien language. For the record, I am her official translator to the world until now.

When a child does something new, every parent skips a heartbeat. It’s a mixed emotion where parents are happy for the baby’s developments but become sad at the same time as they cannot hold this beautiful time. I remember the first time we took Baby M to park when she couldn’t sit properly. We were waiting for her to start walking and play like other children in the park. Last weekend, when we took the big girl to park, she was reluctant to hold our hands and wanted to run after the kids playing around. I tell you, an emotional mother inside me was about to burst into tears. I was happy that this time has arrived within no time, but the thought that now she doesn’t need us to explore the park aches somehow. I never thought I would turn into a possessive-emo-mommy one day. At that moment, I almost visualized the future where she won’t be needing us in her life unlike today where she follows us around the house like a little duckling, wait for us outside washroom, comes running to us when gets hooo (hurt) and wants her mama and baba to witness her every little activity.

From the first time of everything, she is slowly becoming a little more independent each day. Watching her grow up, I miss my parents and feel their hearts more than ever before. Hey kids around the world, take care of your parents because they have taken care of you in the best possible way.

5 thoughts on “The First Times”